The U.S. economy is on track to reduce greenhouse gas emissions 9 percent in 2020 compared to 2019, BloombergNEF reported Thursday.

It's a sign of the impact that COVID-19 shutdowns and the ensuing recession have had on life in the U.S. When workers stayed home and the streets emptied out, they reduced emissions from transportation, which accounted for the largest decline at 4 percent of economy-wide emissions. The power sector drove another 2.8 percent decline, while reduced industrial activity lowered emissions by another 1.6 percent.

The drastic reduction in planet-warming emissions did not result from concerted action on climate change, so much as an unprecedented and deadly pandemic. Without COVID-19, the U.S. would have released just 1 percent less carbon than in 2019, BNEF estimated. The painful cessation of activities to stop the spread of coronavirus delivered the additional 8 percent.

“The economic disruption of 2020 has inadvertently put the U.S. back on track to meet the commitments it made under the 2016 Paris Agreement, prior to President Trump taking the country out of that pact,” they wrote. 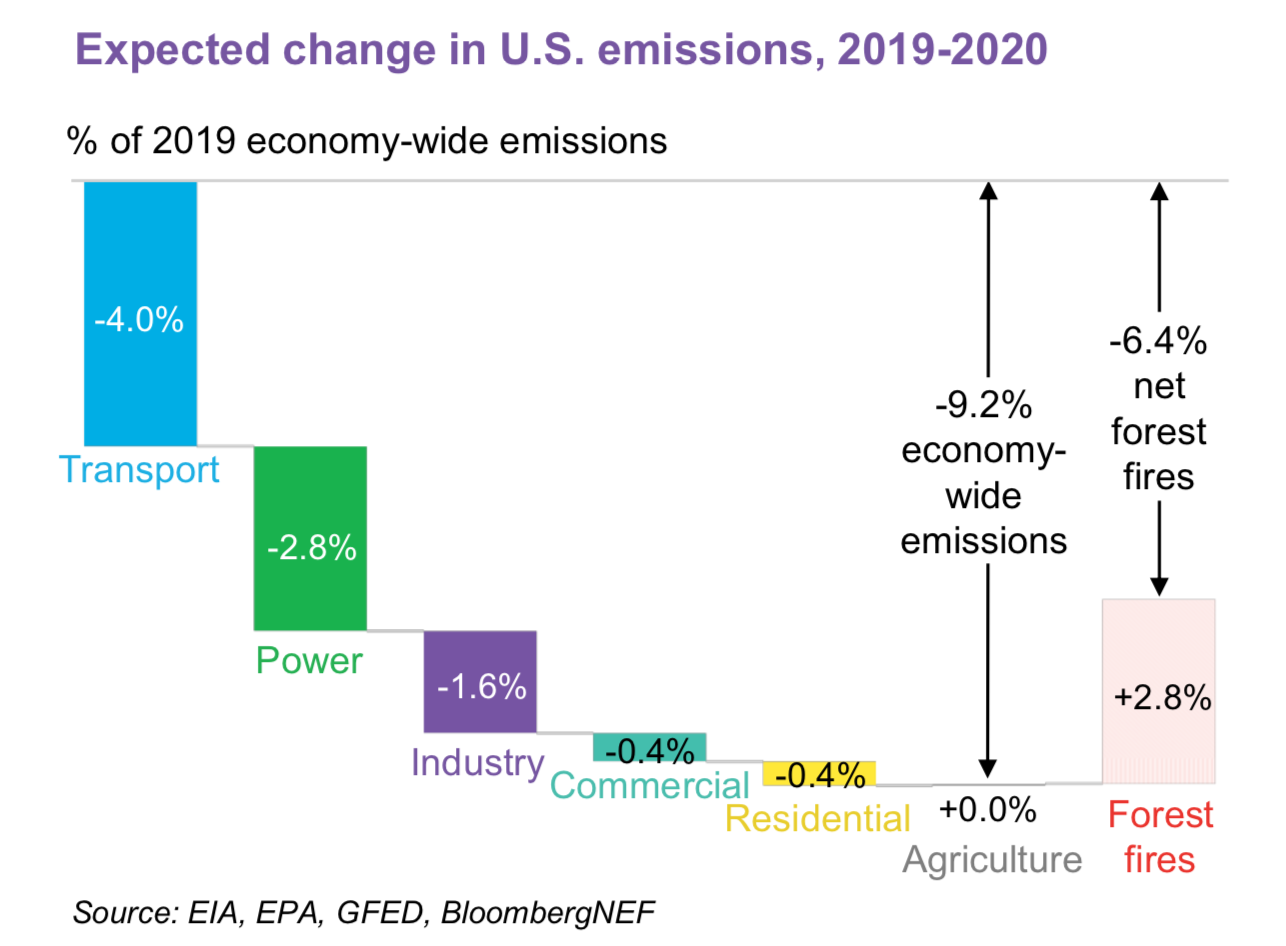 Reduced consumption of gasoline and jet fuel pushed the transport sector emissions down further than other sectors. (Graphic courtesy of BloombergNEF)

However, factoring in the record wildfire season moderates the outlook. The fires burned enough plant matter to release the equivalent of 2.8 percent of 2019 economy-wide emissions. Accounting for that means 2020 nets out at a 6.4 percent decline in overall U.S. emissions.

The authors note that forest fire emissions are not directly comparable to burning fossil fuels, in that forests can regrow and sequester carbon again after a burn, whereas burning fossil fuels emits carbon that stays in the atmosphere. Still, this is an ominous sign for the arid Western states where massive wildfires are becoming an annual norm.

Cutting carbon through economic contraction, or through green investment

The data also pose a messaging challenge for climate activists. This is the nation's best performance in modern history in terms of cutting carbon emissions. But it came about as the result of a historic economic slowdown that plunged millions into unemployment and jeopardized businesses across the country. That's not a recipe that Americans are eager to repeat.

Indeed, Republican politicians did not wait long to frame the economic suffering of the coronavirus era as a preview of what would happen if the nation takes progressive action to reduce emissions through a Green New Deal.

“Democrats seem to think a pandemic is the perfect opportunity to kill millions more jobs and then give households another $75,000 in debt to pay for the Green New Deal,” Republican National Committee spokesperson Elizabeth Harrington wrote in an April op-ed. (The actual cost of a Green New Deal would depend on the specifics of future legislation).

Simply because an economic slowdown led to lower emissions does not mean lower emissions must lead to a slowdown. Indeed, the U.S. has been trending in a lower-carbon direction for years based on shutting down coal power plants. Vice President Mike Pence explicitly praised American innovation for delivering that outcome in the October vice-presidential debate, despite refusing to affirm that humans cause climate change.

Specific policies matter. It's possible to conceive of a clean energy transition that costs a ton and raises the price of energy. But the states that are adopting clean power plants today are largely doing so because they offer cheaper electricity than plants burning coal or gas.

A useful bellwether is Texas's competitive ERCOT market, where private investors choose to build the plants they think will deliver the best return. Those developers are overwhelmingly picking wind, solar and battery plants today as their means of extracting profit.

Electric utilities are another class of investors choosing carbon-free sources to drive economic returns. Across the country, utilities are finding they can stop paying for fuel to burn, build clean energy instead, and return higher margins to shareholders. While only 10 states have committed to net zero emissions by mid-century, voluntary commitments to that effect are now common among major utilities. Even the handful of utilities that have not made a full decarbonization goal are investing heavily in zero-carbon resources.

BNEF expects that emissions will increase in 2021, but that lingering coronavirus disruptions will keep emissions 5 percent lower than in 2019. The circumstances of 2020 are unique; more lasting decarbonization requires additional structural changes to power production and transportation — changes like what President-elect Joe Biden campaigned on.

“Ambitious targets for the power sector will not be sufficient on their own, and policies driving strong emissions reductions in other sectors are needed,” the BNEF analysts noted.

Warning: Do not pay your next energy bill until you read this...  What is the one thing your power company doesn't want you to know? There is a new policy in 2016 that qualifies homeowners who live in specific zip codes to be eligible for $1,000's … END_OF_DOCUMENT_TOKEN_TO_BE_REPLACED