In a significant turnaround from a spring forecast clouded by COVID-19 pandemic concerns, the International Energy Agency has revised its expectations for 2020 global renewables additions. The agency's latest report, released Tuesday, now expects capacity additions to grow 4 percent from 2019, hitting a record of nearly 200 gigawatts this year and bumping up forecasts by 18 percent from the crunch the agency projected in May.

Though many parts of the globe, including the United States, are coping with worsening rates of COVID-19 transmission, IEA’s new forecast indicates that renewables have bounced back quickly from the pandemic-fueled slowdowns that occurred in the spring of 2020.

Many economies have resisted reimposing shutdowns even as case numbers rise, but renewables industries have been treated as essential work in some jurisdictions.

In May, IEA warned that 2020 could be the first year in which renewable capacity decreases year-on-year due to shutdown orders, supply-chain disruptions and the slower pace of financing. Earlier in the spring, IEA director Fatih Birol encouraged countries to look to clean energy as an economic mechanism to help bounce back from the virus.

“Governments will resolve this health crisis. And as they do so, the measures they put in place to help the world economy recover from this extraordinary shock should be designed with our climate challenge in mind,” wrote Birol in March. “Their stimulus plans should seize the clear opportunities for creating jobs and improving vital infrastructure while accelerating the all-important transitions to cleaner energy.”

In July, the European Union approved a green stimulus. The U.S. has not followed suit.

Now, IEA again expects another year of renewables growth. Hydropower (still the largest renewable resource in the world) and wind will account for the great majority of additions this year, according to IEA. But even solar held steady in 2020, despite residential installers reeling from depressed demand. 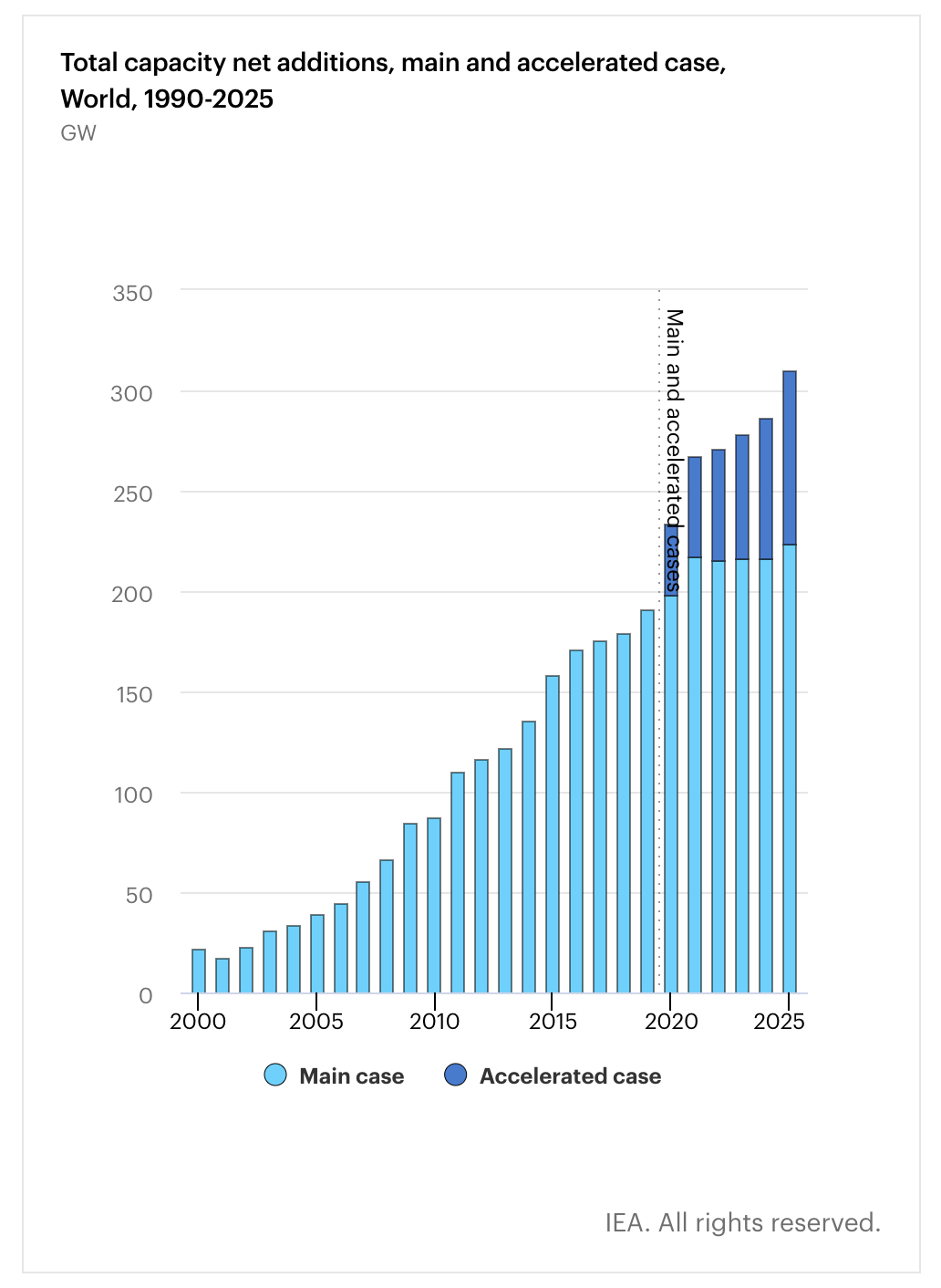 The level of resilience that renewables have maintained in the face of the pandemic and its significant economic headwinds bodes well for a successful remainder of the decade. Even as energy demand falls worldwide, demand for renewables is increasing. Wind and solar will overtake coal capacity in 2024, and they will eclipse natural gas even sooner, in 2023. 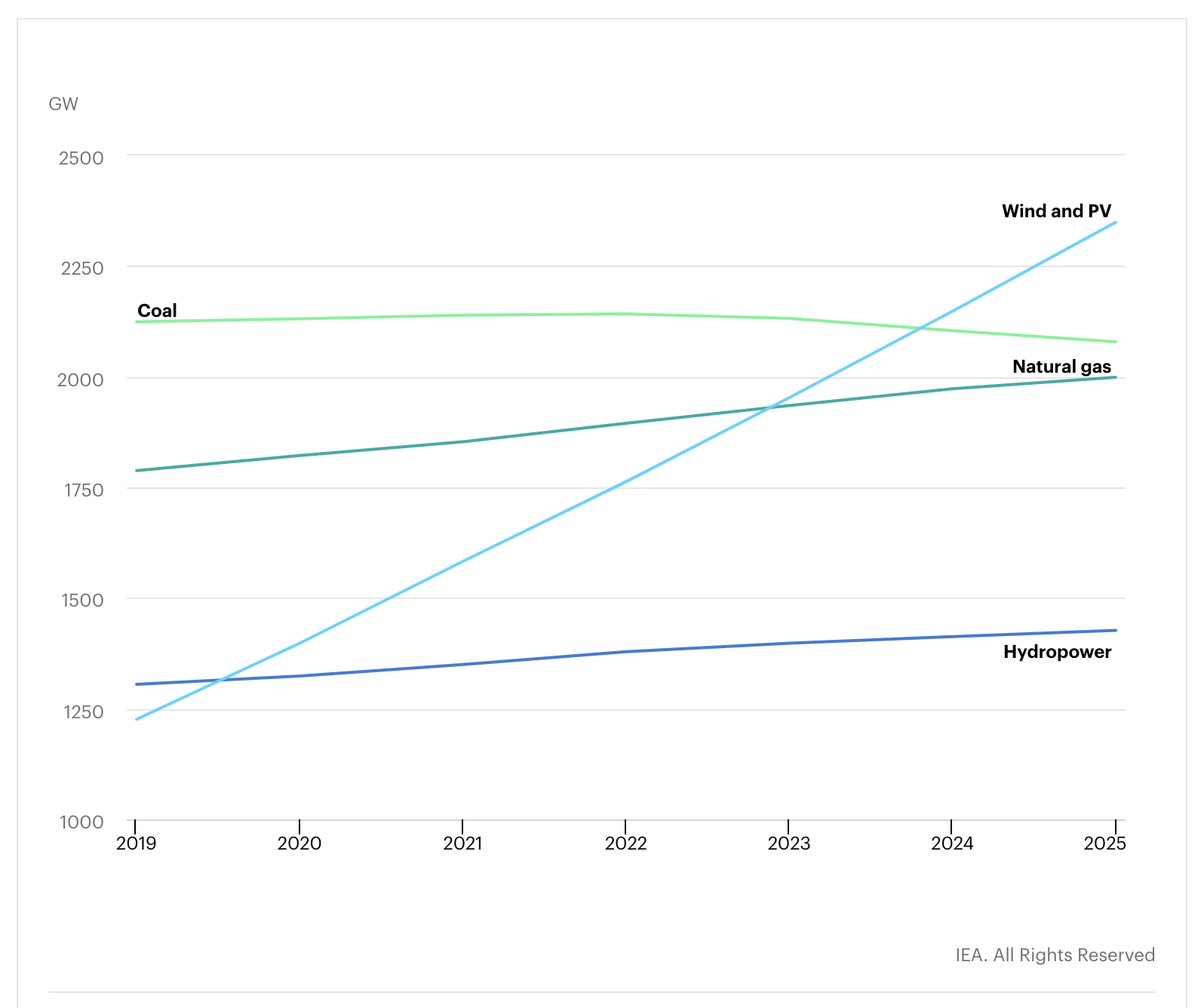 The IEA forecasts that in 2025 renewables will be the largest source of electricity in the world. That’s a meaningful stop on the way to 100 percent clean energy, a goal that more countries are now pursuing.

In October, Japan and South Korea said they would reach net-zero emissions by 2050. In September, China, the world’s largest renewables market and also currently the world's biggest consumer of coal, pledged to reach net-zero emissions by 2060. The European Union has also set out an aim to reach “climate-neutrality” by 2050. Those targets will of course require the electrification of more activities as well as innovations in the production of all types of energy.

In the United States, the recent victory of President-elect Joe Biden, who has laid out a policy priority for the country to reach 100 percent clean electricity by 2035, has provided hope that the U.S. will more actively embrace renewables. Historically, the U.S. has been the largest global emitter of greenhouse gases.

In 2020, the IEA forecasts that the largest renewables growth will be in China, which will add 85 gigawatts in 2020. The United States will rank second in capacity additions with a comparatively much lower 29 gigawatts, followed closely by the European Union with 26 gigawatts.

While the IEA recognizes that renewables growth could mellow in 2022 due to policy headwinds — such as the expiration of federal tax credits in the U.S. — overall, the agency expects renewable resources to account for 95 percent of net power capacity additions through 2025.

Warning: Do not pay your next energy bill until you read this...  What is the one thing your power company doesn't want you to know? There is a new policy in 2016 that qualifies homeowners who live in specific zip codes to be eligible for $1,000's … END_OF_DOCUMENT_TOKEN_TO_BE_REPLACED