First Solar has always done things differently compared to the silicon solar industry at large. From wild technical success with its cadmium telluride thin-film platform to actually delivering profits and not following a growth-at-all-costs strategy, First Solar has cut its own path.

While solar module companies come and go, ending up insolvent like Germany's SolarWorld or China's Suntech, First Solar is still here and still achieving. The company just logged a strong Q1, ahead of expectations on revenue while modestly raising its guidance for 2017. That's just not that common of an occurrence in the 2017 solar industry.

Mark Widmar, First Solar's CEO, spoke to GTM Research head Shayle Kann at last week's Solar Summit and revealed some of his thinking on running a profitable solar business in uncertain times (video archive of the entire event available to GTM Squared members). Here are some of the highlights.

During the talk, Widmar shared some insights on First Solar's business strategy, particularly in light of an oversupply of panels in the market.

“I'm not in the mode where I'm adding tremendous amounts of capacity that hold me hostage, where I have to find ways to settle through that volume,” he said. “What that allows me to do is to be very disciplined [so] we can anticipate and find markets where we can capture the best value.”

Widmar cited a recent bid in Abu Dhabi as an example where signing a $29 megawatt-hour power-purchase agreement might have closed the deal or set a record, but his firm opted out: “There's not a real big profit pool for anyone to capture there. We made a decision not to participate.”

“One of the things that we've done since day one is, we've chosen not to leverage up our balance sheet,” he added. “We have $2.5 billion in cash right now; we have no corporate-level debt. The only debt we have is project-level debt. I refer to that more as working-capital debt.”

Widmar said his management team had foreseen oversupply and ASP challenges ahead in 2017. Their response? “Well, let's be capacity-constrained. Let's make that shift now to be capacity-constrained,” he said. “I only have 2 gigawatts of production right now. I've got more than enough resiliency to sell through that. I can sell that product without any issues, but now I can be selective.”

Utilities want to own and rate-base solar assets

GTM has covered the boom in utility-scale solar and its likely dominance and continued growth in the coming years.

Widmar added some color: “In the U.S. in particular, we're seeing more and more movement toward utility-owned generation. The most logical owner of these assets will be utilities, and they would prefer to rate-base these assets and…to have a turnkey solution.”

What can a utility do that a third party can't?

According to Widmar, it's all about the cost of capital. Widmar cited an instance in which First Solar told a utility in the Southeast that the price difference in a rate-based project versus a non-rate-based utility solar project is the difference between a $30 PPA and a $35 PPA. 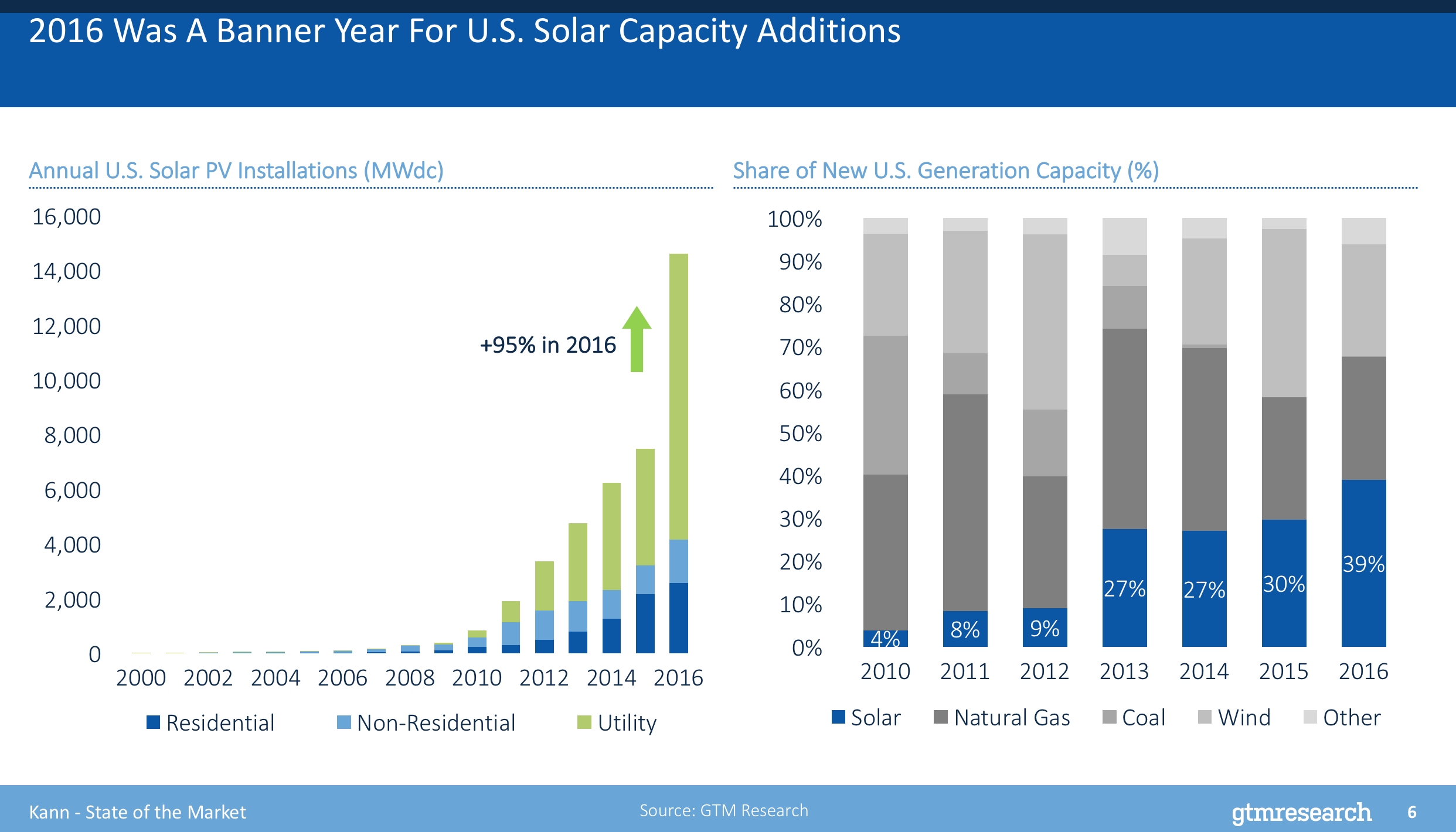 “Seeing the industry from our customers' eyes”

Another strategy First Solar employs is to “see the business and the industry from our customers' eyes,” Widmar said. “One of the things that you'll hear a lot is [that] PV results in reliability and stability issues around the grid. There is an unmet need to ensure that we can actually have very high solar penetration and that it doesn't adversely impact the reliability and stability of the grid.”

To address that, the company enhanced its power plant controls and software optimization. First Solar also worked with the California Independent System Operator and the National Renewable Energy Laboratory. “We took one of our large 300-megawatt power plants in the desert, integrated the controls into that power plant, and we basically demonstrated that that power plant can be managed as any other thermal asset can,” said Widmar.

“You can actually improve reliability and stability of the grid through the proper power plant controls,” said Widmar. “That's an example of where a utility sees that, understands that, and they're willing to make sure that that's spec'd into the design of a power plant.”

GTM's Jeff St. John recently took a careful look at this first-ever grid-responsive solar farm, and how it could help meet federal calls for grid stability.

“The closest thing we have in PV to Moore's law”

When it comes to First Solar's product roadmap, the company's Series 6 solar modules hold the promise of lower module costs and lower balance-of-system costs in trackers and cabling — but first the company has to seamlessly ramp down its existing production and ramp up the new 400-watt-plus form factor. It's this new product that will keep First Solar relevant in the face of continued cost reductions from China Inc.'s solar modules.

“We've always had the most efficient manufacturing process from a capex and environmental perspective — but we've been hampered by the small physical size of our product, which is itself a limitation of our legacy manufacturing platform,” Raffi Garabedian, First Solar's CTO, told GTM. “The 600 millimeter by 1200 millimeter form factor has inhibited our efforts to reduce balance-of-systems costs and has been a limiter in our ability to achieve the full manufacturing cost entitlement of the technology.”

“This is all changing with our Series 6 manufacturing platform,” he said. “Each [Model 6] factory will be about 1 gigawatt in scale (with the exception of our 500-megawatt Ohio plant) and will deliver 2.4-square-meter framed modules from a highly automated inline production process. The resulting S6 module will eliminate (and in some cases even reverse) balance-of-system penalties associated with our smaller unframed S4 module, while simultaneously delivering improved efficiency.”

Garabedian added: “Most importantly, from a corporate sustainability perspective, we expect that the [Model 6] manufacturing platform will allow us to compete profitably in the otherwise unsustainable pricing environment we're experiencing as a result of rampant oversupply from Asia. Thin-film technology is unique in the PV world in that costs scale favorably with processed glass size. This is the closest thing we have in PV to Moore's law.”

Warning: Do not pay your next energy bill until you read this...  What is the one thing your power company doesn't want you to know? There is a new policy in 2016 that qualifies homeowners who live in specific zip codes to be eligible for $1,000's … END_OF_DOCUMENT_TOKEN_TO_BE_REPLACED