This is the third and final part of author Tam Hunt's annual Solar Singularity series. Read the first and second installments here and here.

With all of the good news on the falling cost of renewable energy and electric-vehicle adoption, let’s turn to the bad news.

Global greenhouse gas emissions grew again in 2018, reaching almost 600 million tons of CO2, up slightly from 2017. The really bad news here is that the three years of stagnant and even declining global emissions from 2014-2016 was not in fact a global long-term peak, as many had hoped. The upward march in emissions has resumed.

We also saw in 2018 the most dire statement ever from the UN’s Intergovernmental Panel on Climate Change (IPCC), which issued a special report looking at the likely impacts of reaching a 1.5° Celsius temperature rise. We need to see a global turnaround in emissions trends by 2030 if we are to stay within the 1.5° limit. The IPCC's release states:

The report finds that limiting global warming to 1.5°C would require “rapid and far-reaching” transitions in land, energy, industry, buildings, transport, and cities. Global net human-caused emissions of carbon dioxide (CO2) would need to fall by about 45 percent from 2010 levels by 2030, reaching ‘net zero’ around 2050. This means that any remaining emissions would need to be balanced by removing CO2 from the air.

The good news in the report (yes, there is some), however, is summarized by this statement: “Reaching and sustaining net zero global anthropogenic CO2 emissions and declining net non-CO2 radiative forcing would halt anthropogenic global warming on multi-decadal time scales.”

What this means is that even though historical emissions continue to contribute to warming, if we achieve a global net zero emissions level we can in theory “halt” additional warming before long.

The general consensus in the climate science community is that it’s a pipe dream to suppose that we can achieve a net zero emissions global economy any time perhaps in this century.

My analysis over the years has attempted to show, however, is that this “perceived wisdom” is very likely wrong because of the dramatic global growth in solar and other renewables, plus the dramatic cost declines resulting from this growth, which then feeds back in a virtuous cycle to fuel additional greater growth.

This is the point of the “solar singularity” concept. And in the four years since I wrote my book on this concept the data has strongly supported my position.

The International Renewable Energy Agency (IRENA), an intergovernmental agency with over 170 member nations that is a kind of sister agency to the IPCC, recently completed a report that provides support for my projections and the potential for the multiple renewables revolutions to allay the harm from climate change. Their major new report, Global Energy Transformations 2050, concludes that renewables are ripe — with some additional policy support — to achieve the necessary decarbonization of our energy sectors to achieve global climate goals.

The global energy transformation is happening, driven by the dual imperatives of limiting climate change and fostering sustainable growth. An unprecedented decline in renewable energy costs, new opportunities in energy efficiency, digitalisation, smart technologies and electrification solutions are some of the key enablers behind this trend.

At the same time, the energy transformation must happen much faster. To meet global climate objectives, the deployment of renewables must increase at least six-fold compared to current government plans.

As an added bonus of the green energy transition, IRENA calculates that making this major transition to a green economy will bring a 2.5 percent improvement in global GDP! So not only will this transition not cost anything, it will actually save money. I’ve been saying this for many years now.

IRENA projects that emissions will fall to about 800 Gt CO2 by 2050 under their “REmap” (Renewable Energy roadmap) scenario, which is defined as “well below” 2° Celsius of global warming. Emissions continue falling in later decades in this scenario. 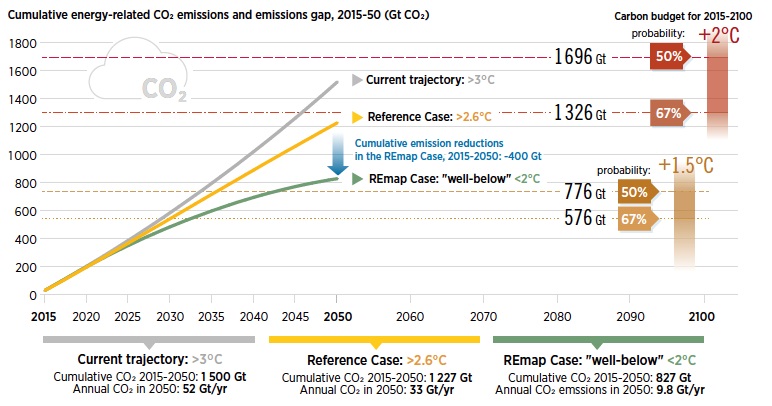 IRENA’s projections are more conservative than mine by about a decade, but time will tell whether I’m overly optimistic or IRENA and others are too pessimistic. In general, we’ve seen growth projections for renewables come in too low (see the discussion of IEA’s projections below).

What about fossil fuels? Aren’t we seeing an increase in fossil fuel use around the world even while we’re seeing strong growth in renewables? Yes and no. Some parts of the world are seeing a short-term bump in the growth of fossil fuel use, while others are showing very promising near- and long-term trends in declining fossil fuel use.

The U.S., Europe and some other advanced nations are already seeing the death of coal writ large. In the U.S., coal power retirements — almost 40 gigawatts (!) are projected to go offline by 2024 — are on pace with the erstwhile Clean Power Plan (passed by Obama), even with Trump’s repudiation of that plan since he took office. You heard that right: market forces are doing what Obama had hoped to achieve with his plan, even without the plan.

Even with these projected coal retirements, however, there will still be about 200 gigawatts of coal power spewing pollution in the U.S. alone. So we have far to go before we can rest easy with respect to continued fossil fuel use.

Market developments are nevertheless working to limit actual power production from coal plants (production is not necessarily proportional to the installed capacity of coal power plants because they can run more or less hours in the day based on economic considerations) due to more competitive alternatives in many power markets around the country. It is “economics,” not policy that is driving the projected plant closures in many states: “cheap natural gas and renewables have made coal increasingly uneconomic.”

Globally, the news regarding coal power is also quite good, as counterintuitive as that sounds. BNEF’s 2018 New Energy Outlook forecasts that global coal power will shrink from 38 percent in 2018 to just 11 percent by 2050. And that’s under current trends. As the renewables revolutions ramp up, we can expect these coal forecasts to steadily ramp down further in the coming years.

Figure 9 depicts the key chart from a late 2018 EIA report looking at U.S. carbon dioxide emissions, showing a 28 percent decline in emissions from the power sector from 2005 through 2017, and the impact of natural gas and renewables on such. 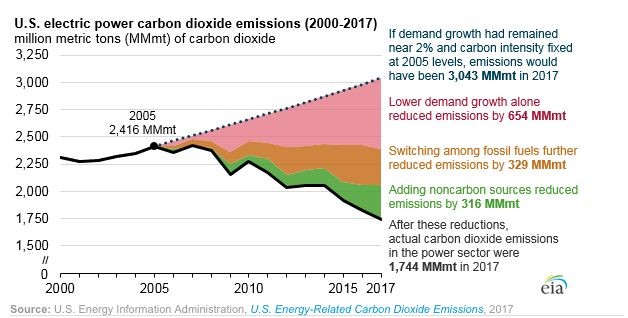 Based on the steadily declining costs of solar with storage, and other dispatchable renewables, and the often exponential nature of renewables growth, we can reasonably expect the impressive green wedge in this chart to grow dramatically in the coming two decades, turning power sector emissions strongly downward.

I also want to highlight a key flaw in many of the UN’s climate change forecasts, which are considered to be the gold standard: a dramatic underestimate of the potential for renewable energy growth.

The UN’s Intergovernmental Panel on Climate Change projections generally use renewable energy projections from official bodies like the International Energy Agency (IEA), but the IEA is horrifically and habitually wrong on renewable energy growth in its annual major report, the World Energy Outlook, as this chart from energy analyst Auke Hoekstra demonstrates with respect to solar PV projections.

Why is the IEA so wrong on this? I really don’t know. The fact remains that they have been so wrong on this technology that we can safely ignore their forecasts until they change their methodology. 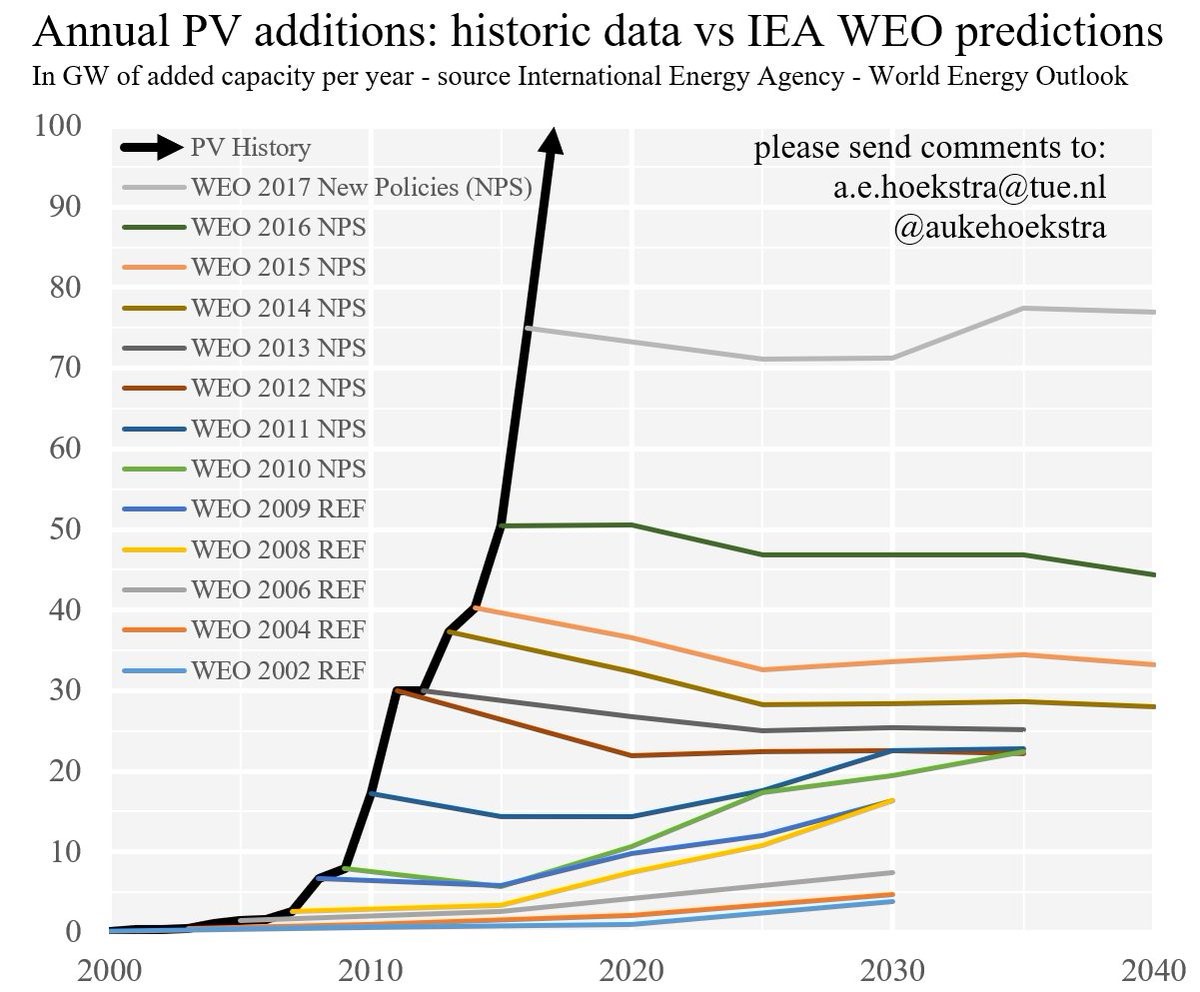 At the end of this lengthy review, I can reasonably reaffirm my conclusion from last year: the green energy war has very likely been won.

The difference in my analysis this year is that I’ve expressly included discussion of climate change and greenhouse gas emissions.

I have not considered industrial use of fossil fuels (such as for plastics production and other areas that aren’t captured in electricity and transportation sector analyses) in this analysis and later updates will look at this area of consumption and emissions.

Is the coming growth of renewable energy and EVs enough to turn around global greenhouse gas emissions? Well, we’ve just seen that there is a good case for achieving a massive reduction in GHGs by 2040 or so, globally. But we can’t know what the impact of current and residual emissions will mean for global climate change. We can’t know if abrupt climate scenarios are still a risk. We just don’t know enough about global climate dynamics to know with any certainty how the planet will respond to continued emissions even under dramatic reductions in emissions.

The best we can do here is conclude that we are well on track to achieve the huge reductions in emissions that the UN and nations around the world are calling for, by 2040-2050, hopefully keeping us in the 1.5 degree Celsius scenario. Will this be enough? We can’t know at this point.

But I have presented a reasonable case for climate optimism, and I hope that I have sufficiently caveated my conclusions to avoid accusations of being overly pollyannish.

We have a long way to go in the decades ahead, but all is not doom and gloom.

Tam Hunt is a lawyer and owner of Community Renewable Solutions LLC, a renewable energy development and policy advocacy practice based in Santa Barbara, California and Hilo, Hawaii. He is the author of the book, Solar: Why Our Energy Future Is So Bright.

Warning: Do not pay your next energy bill until you read this...  What is the one thing your power company doesn't want you to know? There is a new policy in 2016 that qualifies homeowners who live in specific zip codes to be eligible for $1,000's … END_OF_DOCUMENT_TOKEN_TO_BE_REPLACED