Is there any cause for hope on climate and the transition to a green energy economy?

Well, my “solar singularity” updates over the last few years have attempted to track real on-the-ground progress on these issues, following on from my 2015 book, Solar: Why Our Energy Future Is So Bright.

Here’s the summary of this year’s update (my fifth): While there are never any certainties about large-scale occurrences years in the future, let alone decades, we do in fact have a good case for climate optimism, given the rapid pace of the green energy transition.

As in previous updates, this one will focus on solar power, wind power, battery storage, EVs and self-driving technology. These are the intertwined revolutions of the new green energy economy.

Let’s go through the numbers and see where we are now on each key technology. At the end of this three-part series I’ll discuss the renewables revolution in the broader context of greenhouse gas emissions and climate change projections.

Global solar PV installations grew by as much as 109 gigawatts last year, according to Bloomberg New Energy Finance, but perhaps substantially less if early figures from Wood Mackenzie are accurate at just 94.8 GW.  As more data comes in we can expect this large discrepancy in 2018 figures to close somewhat. 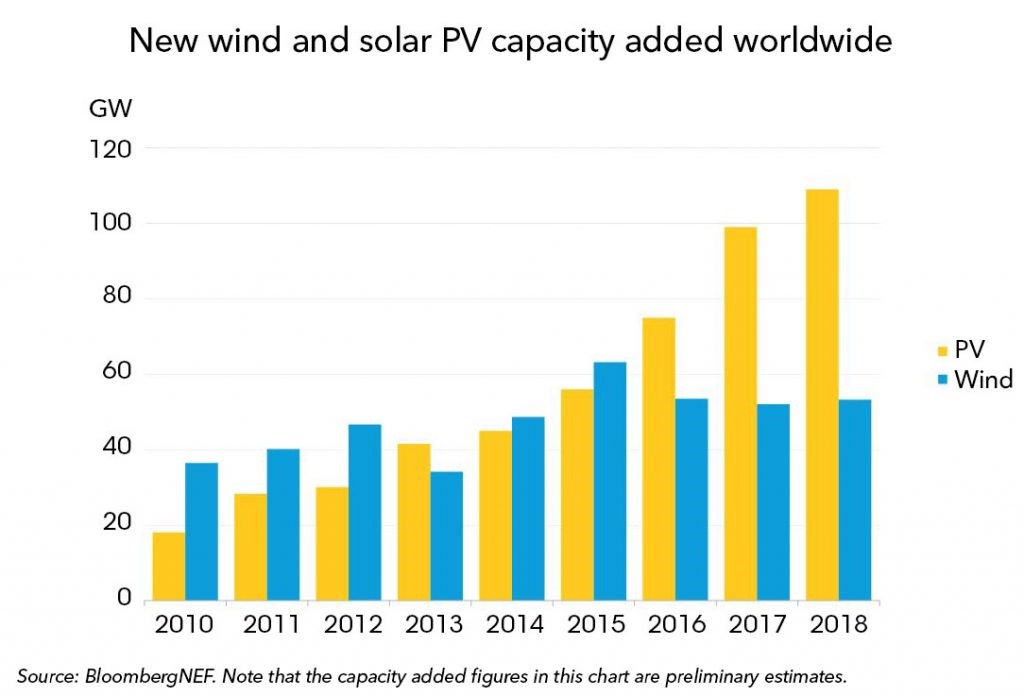 IHS projects 129 gigwatts for 2019, following most projections for a better growth year in 2019 as various solar markets ramp up.

The global solar total at the end of 2018 stands at around 500 gigawatts, which is enough power, at a 20 percent average capacity factor, to provide about 3.3 percent of the global electricity demand (26,700 terrawatt-hours), or about 21 percent of total U.S. electric demand in 2018.

This may seem low still, at “just” 3.3 percent. But this is, in fact, world-changing.

To put this in perspective, let’s look at doubling rates of solar and see how quickly we get to ubiquity or near ubiquity. Once a market has reached 1-percent penetration, it is only seven doublings away from ubiquity. Solar and other renewables are now firmly in the “exponential technology” category, which can surprise by how quickly a slow growth deployment suddenly becomes ubiquitous or near-ubiquitous.

Twenty-five percent annual growth leads to doublings every 2.8 years. Seven times 2.8 years is only about 20 years.

And by 2040 we get to 25 times U.S. 2018 electricity demand, more than the whole world currently consumes in electricity.

How much power will the world actually consume in 2040? Very likely it will be substantially more than today’s amount — even with expected large increases in efficiency of consumption — because of electrification of transportation around the world. This means we’ll need a lot more than even this truly massive amount of solar power in order to become predominantly renewable (which I’ve defined as 80 percent or more of total demand).

It’s to be expected that global solar growth figures will, all else equal, slow somewhat as we move steadily toward higher penetration. We are nowhere near the point, however, that we should see any necessary declines in global solar growth because there are a great many markets around the world that have barely begun to install solar. The relative decline in growth in 2018 was due mainly to a large change in China’s solar policies that went into effect in May.

But is all else equal when it comes to solar growth?

Two key limitations in growth rates to date have been: 1) the fact that solar has historically cost more than traditional power sources, and 2) solar has not been dispatchable.

The central assertion of my “solar singularity” framework is, however, that we are at or near the point where solar in many places around the world is cheaper than traditional sources. And solar is now increasingly being combined with large-scale battery storage (and it’s still cheaper than fossil fuel energy even with added storage) in a growing number of markets.

So the two factors that have been holding solar back from domination are now or soon will be gone. This should, as I’ve argued for many years now, result in practically vertical solar growth as more and more jurisdictions cross over into singularity dynamics. “Vertical” in this context means that growth will max out at 100 percent of new annual global energy demand, whatever that amount may be each year.

Looking domestically, U.S. solar installations continued at a healthy pace but a bit lower than in 2017, adding 10.6 gigawatts, according to the SEIA/Wood Mackenzie U.S. Solar Insight Year in Review for 2018, translating into a 20.4 percent annual growth rate. 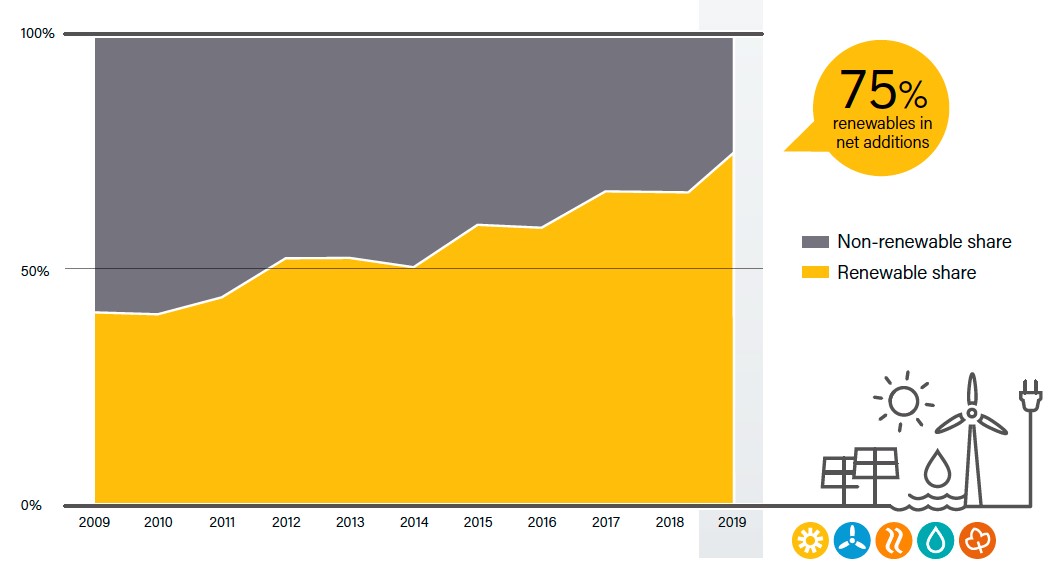 U.S. solar energy production (which is what really matters, more than the gigawatt installed capacity figures that get most headlines), however, grew faster than installations, at 24.4 percent year over year, according to the EIA, which combines utility-scale, commercial- and small-scale solar into a total production figure of 96.1 gigawatt-hours. This comprises 2.3 percent of U.S. electricity demand — up dramatically from just 0.6 percent in 2015, just three years earlier.

The key trend for long-term projections, however, is cost, and strong cost reductions continued in 2018, despite the Trump tariffs on solar imports. Here’s the key passage from the EIA report just mentioned:

All-in costs for solar at under $1/watt is remarkable and we are clearly on track for reaching “almost zero” marginal costs for solar, as predicted by Jeremy Rifkin in his eye-opening book The Zero Marginal Cost Society. $1/watt for solar translates into about 2.5-4 c/kWh in reasonably sunny areas, which is cheaper than traditional sources of power by a significant amount, even at today’s relatively low fossil fuel prices, and even with storage added in order to make solar partially dispatchable.

A recent report from Navigant Consulting found that solar plus storage already beats natural gas on costs in many parts of the country: “This storage plus renewables (storage-plus) development is enabling a transition of large-scale renewables from intermittent assets to dispatchable resources able to displace thermal assets…”

More support for these long-term trends that favor solar backed up with energy storage may be found in a recent analysis concluding that all U.S. fossil fuel plants are at risk from more competitive renewable energy. I’ll discuss storage in more detail below.

We’re seeing similar trends play out in Asia, the key market for coal power generation, as Japan, a major backer of new power plants in that region, is shifting strongly away from coal and toward renewable energy, prompting some analysts to conclude that we may be seeing “the start of the end for thermal coal” power in the region.

Wind growth is good but not great

Wind power growth was good but not great in 2018, with 51.3 gigawatts of new capacity added globally, bringing the cumulative total to 592 gigawatts, according to the Global Wind Energy Council. This is slightly less than in 2016 and 2017, so global growth seems to have flatlined for now. Wood Mackenzie projects a doubling of global capacity by 2027, with annual additions averaging 65 gigawatts.

This is good but not enough to keep up with solar. With solar now over 500 gigawatts worldwide and growing at least 100 gigawatts annually, it looks like 2020 will almost surely be the year that solar surpasses wind in terms of installed capacity worldwide. This is a big deal since solar has been viewed for so long as a weak sibling compared to wind. Solar is also vastly more scalable than wind power because of the visual and animal impacts that wind power often entails.

I’ve had my eye on offshore wind for many years now and my feeling has long been that deepwater offshore wind is the game changer because of very high capacity factors and because of highly limited visual and wildlife impacts when these massive machines are located far from shore. The offshore wind market is picking up but still too slowly for my likes.

Equinor forecasts about 13 gigawatts of floating offshore wind globally by 2030, but from such a low base (just 30 megwatts today) this forecast must be taken with a large grain of salt. The challenge for floating wind is keeping costs reasonable and ensuring that the platforms don’t sink.

GTM recently reported on IRENA’s calculations that 140 gigawatts of global wind and solar came online in 2018, or 63 percent of all new generation capacity when combined with other smaller renewables markets. That’s remarkable when we consider it’s up from 25 percent in 2001. Renewables are steadily eating away at market share and depriving fossil fuel generation market opportunities.

We need massive amounts of battery storage to back up all of that wind and solar to fully compete with fossil fuels and nuclear power. We’re finally starting to see the storage market really roar. Global storage growth was excellent in 2018, at about six GWh of new capacity added. That’s 147 percent growth over 2017’s figures.

Battery storage costs continue to plummet, falling 35 percent in 2018 alone, and fully 76 percent since 2012, according to BNEF’s recent report. The learning curve for battery storage, which I wrote about in last year’s update and will now call the “Kammen Curve” in recognition of Dan Kammen and his team at UC Berkeley, has demonstrated an average 17.3 percent decline in the cost of energy storage with every doubling of global production.

BNEF, in its annual levelized cost of electricity (“LCOE”), now concludes that not only are solar and wind the most competitive “bulk generation” options in “most countries,” “the encroachment of clean technologies is now going well beyond that, threatening the balancing role that gas-fired plant operators, in particular, have been hoping to play.” 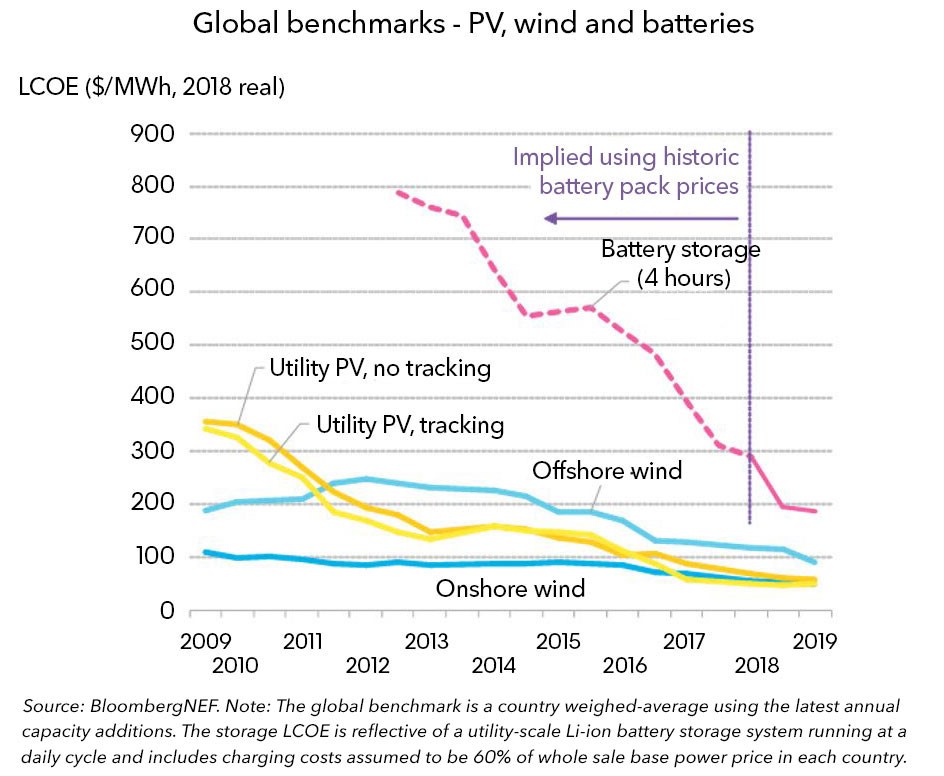 Solar plus storage is an increasingly common configuration. A recent report from Navigant Consulting concludes that solar plus storage will be necessary for most utility-scale deployment as solar penetration increases. Solar without storage provides good value to the grid at lower penetration levels, but as peak demands are met with solar during daytime production, if more solar is added it has to have at least some storage in order to serve late afternoon and evening loads.

In sum, the battery storage revolution is looking very good indeed. The only cloud visible currently is that residential battery storage, like Tesla’s Powerwall or LG’s home-based batteries, have seen price increases in the last year. But this seems pretty clearly a result of high demand allowing cost increases, and not a result of actual production cost increases.

Stay tuned for the second and third parts of this year's Solar Singularity update, touching on the impact of electric vehicles and whether the rapid rise of renewables will be enough to curb greenhouse gas emissions.

Tam Hunt is a lawyer and owner of Communitiy Renewable Solutions LLC, a renewable energy project developmetn and policy advocacy based in Santa Barbara, California and Hilo, Hawaii. He is the author of the book, Solar: Why Our Energy Future Is So Bright.

Warning: Do not pay your next energy bill until you read this...  What is the one thing your power company doesn't want you to know? There is a new policy in 2016 that qualifies homeowners who live in specific zip codes to be eligible for $1,000's … END_OF_DOCUMENT_TOKEN_TO_BE_REPLACED