A German startup aims to sell a self-charging electric car covered in solar panels from 2022 after raising nearly $60 million in a recent 50-day crowdfunding campaign.

Munich-based Sono Motors expects its €25,500 ($27,600) electric car, the Sion, to benefit from a range extension of as much as 20 miles per day in Germany, depending on the season and weather, thanks to a solar charging system integrated into the body of the car.

More than 13,000 customers have already pre-ordered the vehicle, the company said. It expects the first cars to roll off the assembly line of a former Saab factory in Trollhättan, Sweden, in September 2021, with volume production at the start of 2022.

The company is looking to raise a further €205 million before starting production, she said. Of this, around €70 million will be in the form of debt capital from banks, subsidy providers and private lenders.

The Sion will be powered by a 35-kilowatt-hour battery containing 192 prismatic lithium-ion cells with a nickel, manganese and cobalt ratio of 622.

Sono says the car will have a range of 255 kilometers (159 miles) on a single charge and the battery should take 30 minutes to recharge up to 80 percent at a rapid charging station.

The Sion will include bidirectional charging technology so it can be used as a mobile energy storage device, and will also feature a novel moss-based dashboard air purifying system. But the most innovative feature is the presence of 248 solar cells spread across the outside of the car. 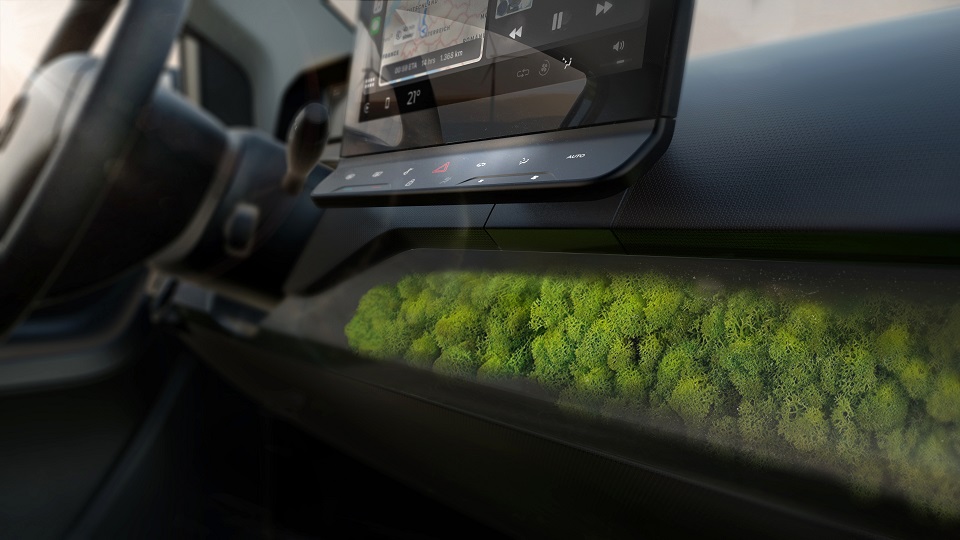 Why hasn't anyone else thought of this?

Sono plans to use solar panels instead of paint as a covering for the Sion, embedding the cells in polymer rather than glass to lighten the shell of the vehicle by 20 percent compared to standard metal body parts.

The company’s viSono solar body panels are designed to deliver up to 220 watts per square meter, compared to 180 watts for standard PV. “This enables the Sion, through the power of the sun alone, to generate an additional range of up to 5,800 kilometers [3,600 miles] per year, completely emission-free and free of charge,” said Schroeder.

In practice, the range extension will depend on local conditions. Sono calculates the Sion could travel around an extra 2 miles a day in December, or 15 in July, in average Munich weather. These ranges could drop to around 2 and 6 miles, respectively, under cloudy conditions, or 6 and 21 in sunshine.

“This makes the car ideal for commuters, who do an average of 17 kilometers a day to get to work in Germany,” Schroeder said. “Our goal is to cover many short trips with solar energy only. We are convinced that solar integration can further support e-mobility in achieving a breakthrough in the mass market.”

Tom Heggarty, a principal analyst in Wood Mackenzie’s energy transition practice, was more circumspect about the concept. “I can’t see that kind of solution ever being anything more than very niche,” he said.

“Does the fact that you’re getting that panel for free offset the additional cost of [integrating] the PV panels? I don’t know.”

Sono is thought to be the first automotive manufacturer planning a solar panel-coated car for mass production. However, solar panels are already being used in motor transportation elsewhere.

In the Netherlands, for example, the coach company FlixBus this month announced it had installed solar panels on a bus carrying passengers from Dortmund in Germany to London in the U.K. The panels feed on-board electronics rather than contributing to the vehicle’s motive power.

Nevertheless, the company said the panels had helped cut diesel consumption by 7 percent, equivalent to around 1.7 liters per 100 kilometers (62 miles).

“Based on the initial results, we will evaluate the extent to which we amplify this pilot to more buses or even all buses in the network,” commented Jesper Vis, managing director of FlixBus Benelux, in a press release.

Warning: Do not pay your next energy bill until you read this...  What is the one thing your power company doesn't want you to know? There is a new policy in 2016 that qualifies homeowners who live in specific zip codes to be eligible for $1,000's … END_OF_DOCUMENT_TOKEN_TO_BE_REPLACED