Solar manufacturer and developer SunPower reported continued losses in the first quarter of 2019. The down quarter comes amid a restructuring effort that’s shifted SunPower's development efforts away from utility-scale solar and toward distributed residential and commercial solar opportunities, as well as energy storage.

But in a Tuesday afternoon interview, CEO Tom Werner noted that SunPower's restructuring efforts are bearing fruit. “Our financials are improving markedly,” with second-quarter guidance projecting a GAAP net income of break-even to $20 million, and full-year guidance for $1.9 billion to $2 billion in revenues and 1.9 to 2.1 gigawatts of product shipped.

The driver for this improvement is the alignment between SunPower's upstream and downstream businesses, he said. On the upstream side, SunPower is introducing new higher-efficiency solar panels aimed at the needs of the residential and commercial-industrial markets it's now focused on. And “in the downstream business, SunPower will become an energy service provider, based on the world’s best solar systems,” said Werner, with energy storage and software added on.

Last year also saw SunPower sell its joint venture YieldCo with First Solar, 8point3, at a discount to its market value. The company also sold off its U.S. residential lease portfolio and sold Enphase the microinverter business it got from its 2014 acquisition of SolarBridge.

Werner framed the March 2019 sale of 233 megawatts of commercial solar project leases to a subsidiary of Goldman Sachs Renewable Power, which brought SunPower $87 million, in similar terms. “We’ve talked for several years now of selling non-core assets to generate cash so we can invest it in the business and to simplify our P&L, and this is a step to do that.”

SunPower’s Next Generation Technology solar panels, which the company says will perform similarly to its IBC modules but at a 40 percent cheaper price point, began initial production in the fourth quarter of 2018.

A closer look at SunPower earnings

SunPower’s Residential business reported non-GAAP revenues of $167 million and added about 9,000 customers in the first quarter, despite weather-related slowdowns in key markets such as California. SunPower now has about 275,000 residential customers, and 35,000 new homes in its backlog, with a projection of 15-percent growth for 2019. The quarter also saw the release of SunPower’s “instant design” digital interface, which uses machine learning algorithms to reduce time to scope out a potential customer’s suitability for solar to less than a minute, Werner noted.

The commercial business reported first-quarter revenues of $75 million with 25 megawatts deployed. It also added to the roster of customers signed up for SunPower’s Helix storage system, which has booked 38 megawatts of sales so far in California and Hawaii, with 110 megawatts in pipeline, and an “attach rate” — the ratio of commercial solar customers that end up adding storage — of 35 percent.

On the residential side, SunPower’s Equinox storage product remains on plan for release in the second half of this year. While SunPower now sells batteries alongside residential solar systems, the uptake is currently between 5 and 10 percent, Werner estimated.

“We expect that to increase dramatically as we release our own offering,” he added. 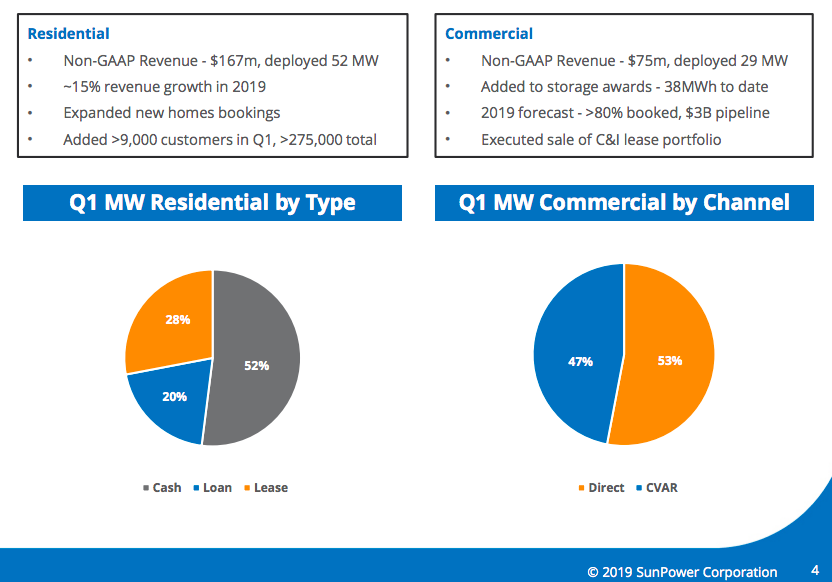 SunPower, which made most of its panels in Mexico and Asia, was hard hit by the solar tariffs imposed under the Section 201 trade case brought by Suniva and SolarWorld Americas. In January 2018, the Trump administration set a 30-percent tariff for virtually all foreign-made solar panels.

SunPower was also one of the only solar manufacturers to win an exemption from Section 201 tariffs for certain designs of foreign-made panels, in a September decision from the U.S. Trade Representative that appeared tailored for SunPower’s technology.

Warning: Do not pay your next energy bill until you read this...  What is the one thing your power company doesn't want you to know? There is a new policy in 2016 that qualifies homeowners who live in specific zip codes to be eligible for $1,000's … END_OF_DOCUMENT_TOKEN_TO_BE_REPLACED