Aging is a fact of life, for people and equipment alike. But the negative impact of aging on wind and solar power plants is being reduced, thanks to maturing technologies and commercial practices.

Researchers at Berkeley Lab have taken a new look at how wind and solar generators are performing in the field, leveraging data from the sizable U.S. utility-scale wind and solar fleets.

A paper in the journal Joule finds that older wind turbines, installed in the late 1990s and early 2000s, are showing their age, but on average maintain 87 percent of their year-two annual production by year 17, shown in Figure 1 below. (Note that teething issues reduce year-one performance.)

Newer wind turbines in the U.S. are doing even better: those installed since 2008 have seen very little performance reduction during their first decade of life. These rates of performance decline show that the U.S. wind fleet is aging reasonably well — in general, declining at a slower pace than wind plants studied in Germany, Sweden, the U.K. and Denmark. 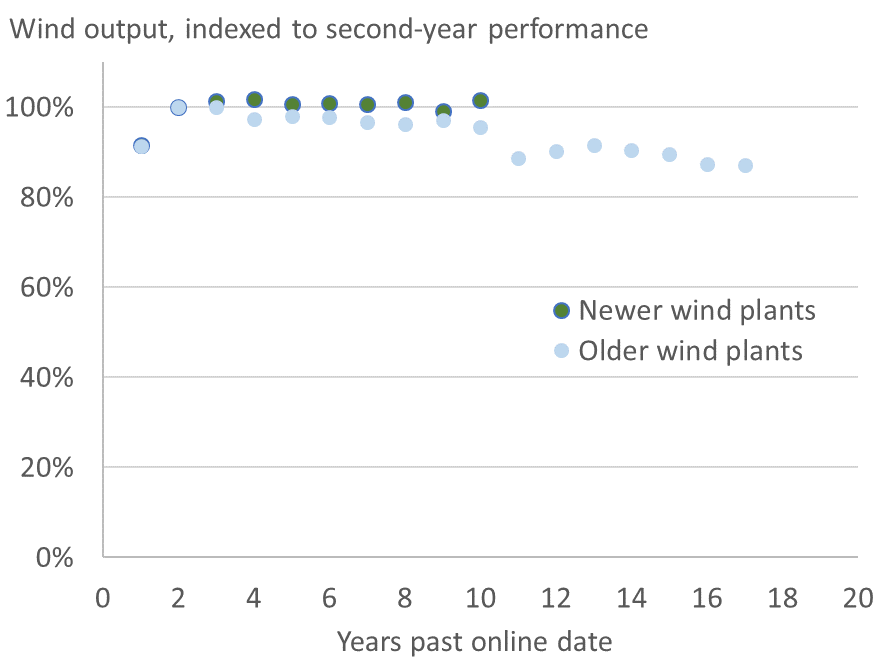 Another paper in the Journal of Renewable and Sustainable Energy finds that the oldest utility-scale photovoltaic plants in the U.S., built in the late 2000s, perform on average at 83 percent of peak performance in year 11. Newer plants built after 2012 are degrading at a considerably slower rate of 0.9 percent per year, compared to the 1.5 percent per year rate for pre-2013 plants. Both older and newer PV plants have generally lived up to initial performance expectations in their first full year of operations.

At the same time, the wind and solar industries are becoming more confident about the durability of their equipment. Other recent Berkeley Lab research shows that expectations of solar project life have increased to 32.5 years on average, and that operating expenses dropped by half over the last decade. Earlier work, also by Berkeley Lab, showed the same trends in project life and OpEx for U.S. wind plants, with expected life exceeding 30 years in most instances and OpEx running at just half the level it was in the late 1990s.

Understanding how projects perform as they age, along with their expected OpEx and useful life, is important for planners exploring how to meet future energy needs, for investors anticipating financial returns based on plant costs and performance, and for plant operators budgeting for future maintenance and repair.

A key insight of the research is that the entire plant can contribute to age-related performance decline. Solar module degradation, for example, is widely studied and covered by warranties, but power output can also decline over time due to equipment failure throughout the plant, module soiling, and downtime for maintenance, among many other factors.

These broader performance drivers are critical to understand. Any decline beyond the 0.5 percent per year that is typically warranted by module manufacturers and commonly assumed within power purchase agreements can cut into investor returns, if it is not anticipated in advance.

Berkeley Lab researchers used novel approaches in these studies, assessing how actual plants have performed over time, while controlling for variation in the wind and solar resource, as well as curtailment. The research covered a sizable fraction of operating wind and utility-scale solar capacity in the U.S., including 411 utility-scale solar plants totaling 21 gigawatts, and 917 wind plants totaling 86 gigawatts.

The research did not dig in to the engineering details of component failure modes or degradation drivers, but it did find some important relationships beyond project vintage. For example, wind turbines with longer blades relative to generator size (known as lower “specific power” turbines) have become increasingly popular, and are holding up better with age.

Larger solar plants are seeing only half the performance decline of plants smaller than 25 megawatts, suggesting that these larger facilities have more-aggressive operations and maintenance protocols. The research also finds a small but noticeable step-down in the performance of wind plants as they age out of the 10-year federal production tax credit, which provides a per-kilowatt-hour incentive.

Both of these findings demonstrate that while aging is a fact of life, it can also be managed. Just as humans make lifestyle choices to potentially combat the effects of age, wind and solar project owners make operational tradeoffs to minimize the cost of energy and maximize value over time. Project size, power purchase agreement terms, federal and state incentives and other factors all impact these tradeoffs surrounding maintenance budgets and approaches.

Age-related performance impacts are not, of course, restricted to solar and wind generators. All physical systems degrade. One study, for example, cites research showing that gas turbine efficiency drops by 0.3–0.6 percent per year with regular washing and component replacement, or by 0.75–2.25 percent without, and that the efficiency of thermal power plants is sometimes assumed to fall by 0.15–0.55 percent per year.

Nothing stays new forever. It should come as no surprise, therefore, that the performance of wind and solar plants trails off as they age. This new research shines light on the magnitude of age-related performance decline, identifies some of the drivers, and illustrates how aging is a managed process, not solely a physical inevitability.

Warning: Do not pay your next energy bill until you read this...  What is the one thing your power company doesn't want you to know? There is a new policy in 2016 that qualifies homeowners who live in specific zip codes to be eligible for $1,000's … END_OF_DOCUMENT_TOKEN_TO_BE_REPLACED