Colorado-based Clean Energy Collective said the strategic investment will allow it to more than double its development pace. The company is now targeting 260 megawatts of development over the next two years.

“The only thing [the acquisition] changes is [it] basically provides more access to capital,” said Spencer. “Ideally, we can do more community solar development.”

First Solar acquired a minority interest in Clean Energy Collective in 2014, and continued to own a stake as of the beginning of this year. First Solar did not immediately respond to questions about its position in the company following this week's deal.

North American Infrastructure Partners, also based in Colorado, said that it launched last year with an eye towards actively managing its investments.

Michelle Davis, senior solar analyst at Wood Mackenzie Power & Renewables, said the acquisition reinforces the trend of infrastructure funds and other institutional capital investing in solar. Mergers and acquisitions in the commercial solar market — a category that includes community solar — has already hit $500 million this year. 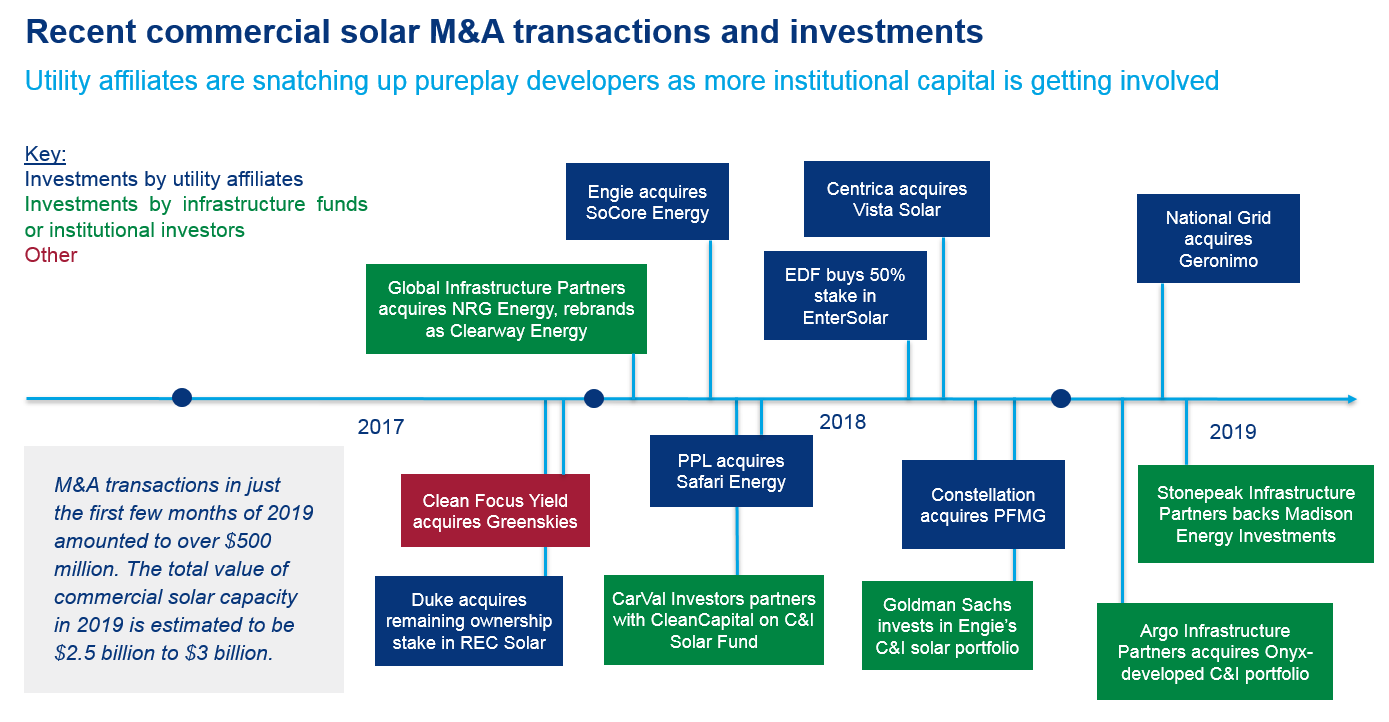 Among the recipients of those investments, Minnesota-based Geronimo Energy, acquired by National Grid in March, also develops community solar projects, as does Greenskies and NRG Energy (now Clearway Energy).

According to Davis, most commercial and industrial (C&I) developers now have some community solar in their pipeline. “Community solar is the fastest growing and oftentimes most lucrative opportunity for C&I developers,” she said.

Analysts forecast that the U.S. C&I solar market will see $2.5 to $3 billion of investment this year, with community solar representing a growing share.

Clean Energy Collective ranked 13th among all installers of C&I solar in the country last year, according to WoodMac, which dosen't specifically break out numbers for community solar developers.

Clean Energy Collective’s current portfolio spans 16 states, and the developer said the new money will help it expand in new and existing markets, including Massachusetts, New York, Connecticut and its home state of Colorado.

Warning: Do not pay your next energy bill until you read this...  What is the one thing your power company doesn't want you to know? There is a new policy in 2016 that qualifies homeowners who live in specific zip codes to be eligible for $1,000's … END_OF_DOCUMENT_TOKEN_TO_BE_REPLACED