Solar loans emerged as the dominant consumer finance product in 2018, according to new data.

Solar loans now claim a 45 percent share of the residential market, while third-party ownership (TPO) has fallen to its lowest point since 2011 at a 33 percent market share.

A new residential solar finance report from Wood Mackenzie Power & Renewables found that Mosaic maintained its position as the top solar loan provider last year, claiming a quarter of the loan market. The report notes that the ITC stepdown will give TPO providers an edge in the early 2020s and likely foster increasing competition in the solar loan market as loan structures simplify.

Last year’s stagnation in the TPO market can be attributed largely to Tesla’s changing customer acquisition tactics, which led to a decline of overall installation volumes in 2018, as noted in the Solar Market Insight 2018 Year in Review.

Strong residential solar growth in Texas and Florida last year also played a part in the relative ascent of solar loans, as third-party-ownership is currently limited in those states.

The growing solar loan industry is characterized by very thin margins. Lenders felt pressure to raise prices incrementally last year, with some eliminating low interest products or raising dealer fees. Some solar loan providers are also expanding into verticals such as storage and home improvement where margins may be higher.

Perhaps more interesting than last year’s market shift is what the future holds for solar loans as the ITC stepdown approaches. 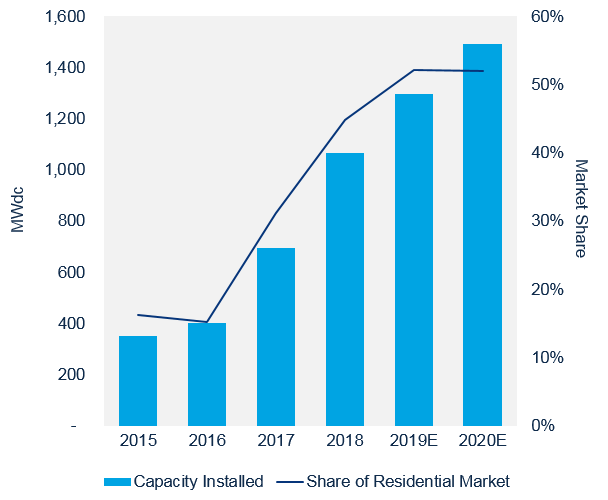 TPO systems will see a small bump in 2022-2023 when the federal Investment Tax Credit is eliminated for customer-owned systems. (TPO systems will still benefit from a 10 to 30 percent ITC, depending on whether or not providers choose to safe-harbor equipment.)

“As a result of the ITC stepdown, solar loans will start to look increasingly like regular consumer loans. As the ITC steps down and is eventually eliminated for customer-owned systems, loans will move away from the current ‘two loan’ structure, where consumers are expected to pay 30 percent of the loan down as soon as they get their federal tax credit,” said Allison Mond, senior solar analyst with Wood Mackenzie Power & Renewables.

Today, if a consumer fails to pay this 30 percent to the loan provider in a timely fashion, their loan reamortizes, resulting in higher payments for the consumer.

Once this complex loan structure disappears, it follows that larger commercial banks, many of which have been hesitant to enter the solar finance space so far, may start to offer more direct to consumer loans for solar. The already competitive solar loan space will become more competitive.

Dedicated solar loan providers will likely still have a competitive advantage once commercial banks enter the space because they have large installer networks and the technology to seamlessly integrate into those installers’ sales tools.

“Those relationships will become even more important in a post-ITC world,” noted Mond.

The US residential solar finance update: H1 2019 report includes market shares and rankings of key financiers in the residential solar space (including lease/PPA providers and loan providers), forecasts of the TPO, loan, and cash markets, information on different consumer finance product offerings, and an update on project finance trends.

Warning: Do not pay your next energy bill until you read this...  What is the one thing your power company doesn't want you to know? There is a new policy in 2016 that qualifies homeowners who live in specific zip codes to be eligible for $1,000's … END_OF_DOCUMENT_TOKEN_TO_BE_REPLACED